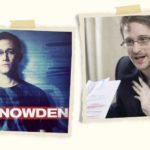 Snowden (2016) is all about the whistleblower who leaked National Security Agency (NSA) very highly classified information in 2013 while he was a Central Intelligence Agency (CIA) employee and then NSA’s subcontractor Booz Allen Hamilton.

The movie was made by Oliver Stone, which, as usual, gave you a good idea, upfront. He didn’t disappoint. There is no mention of consequence of Snowden’s action. His desire to leak was weak. The fact that he lives in Moscow at this moment, couldn’t be more ironic – consider what Russia is and has been doing.

Stone portraits him in a positive and warm light but  in reality he’s a freaking cold fish. For entertainment, the movie is good, with good acting but I found it shallow.

All Actions Have Consequences.

Is he a holy fool, a hero, doing all of us a service, or a traitor, doing us disservice?

In 2019, he published his memoir Permanent Record, a solid 5-star from 8,909 ratings on Amazon, Wire interviewed him: After 6 Years in Exile, Edward Snowden Explains Himself, that is not any specific surveillance abuse that drove him to reveal but

Instead, he writes that it’s the building of a potential panopticon—what he has called turnkey tyranny—with every tool in place to record everything about everyone, to turn any individual’s secret life against them at the whim of the powerful, that he sought to expose and devote his life to fighting. “The construction of the system was itself the abuse,” he says. “We’ve been forced to live naked before power for a generation.”.