Scenes From a Beijing Bathhouse

Scenes from a Beijing Bathhouse:
A Family of China

A Memoir by Irene Eng

My fondest childhood memories in Beijing are of visiting the bathhouse with Nainai, my grandfather’s favorite concubine. The old luxury bathhouse, Xinghua Yuan, was only a block away from our house in Xidan, the major commercial district in the city. One spring day in 1966, Nainai and I were walking hand in hand to the bathhouse. We knew of a shortcut from our home, but she preferred the noisier and busier thoroughfare, Eternal Peace Avenue.
In just a matter of days, China would be plunged into a movement known as the Cultural Revolution, engulfing the nation in a decade of misery, death and ruin. One mile east of here, Chairman Mao would receive eleven million Red Guards at Tiananmen Square, and the very streets we walked on would overflow with students from across the country. Each one would wield a ‘Little Red Book’ of quotations from Mao Zedong, and each one would seek blood red revenge.
But today, daily life in Beijing bustled along as usual, the people and traffic less interesting to me than the woodlice that nestled in the niches between the buildings and walkways. The ugly creatures always scared me, but with Nainai at my side, I was bold enough to seek one out. After spotting an especially chubby one, I kicked some dirt at it to show that, for once, I was in command. As I knelt to study the scurrying woodlouse, I felt Nainai suddenly squeeze my hand. Looking up, my gaze followed the tilt of her chin to where I spotted Popo, my grandmother. Sporting thick-rimmed black eyeglasses and clunky shoes, she hobbled toward us with bowed legs.
Popo had always been repellant to me. I would shrink away from her gnarled figure, the zig-zagged, yellow-tinted fingernails and nicotine reek. She had a countenance that alternated between dour and stern. Instead, it was easy for me to gravitate to the grace and glamour of Nainai, which I did so with full fervor. I knew that she sniped at Popo behind her back, deriding her at every turn, but after all, they both vied for the affections of my grandfather, Yeye. 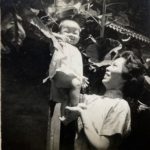 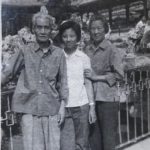