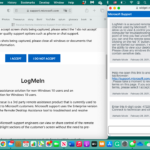 Suddenly, one of my large Word documents is in trouble: large section became header and is showing up in TOC (table of content). I delete them one by one but to no avail. Then the document became slow and ultimately, descended into unresponsive state. I’ve been working on this docu for a few weeks. All was lost.

So I contacted the Microsoft for help. The supervisor said, they don’t dive deep into our document any more, for privacy reason. This is a rather thorny statement, when my document isn’t working and my work of few weeks are lost, I don’t think I mind ‘losing privacy’ at this stage.

My next try is, to fix the Word itself. But unfortunately, none of the MSFT tech can share screen with me, not matter how hard we tried. After three times (one from Nigeria, one from West Africa and one from the Philippines; and switched between Safari and Chrome), I turned to Apple, which they could, easily.

“Are you trying to block MSFTers?”

“Please, you take your fight elsewhere and leave us, the end user out, in peace?”

Jokes aside, and after I have the Appler on hand, who can read what the MSFTer’s chat, the MSFT and I still couldn’t share my screen.

Hopefully, this is just an isolated problem. In the end, I uninstalled/re-install the Word, and it works, for now.