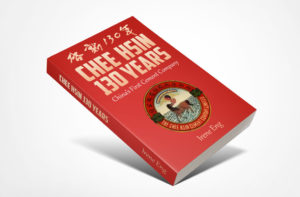 Vanderbilt, Carnegie, Rockefeller. Most everyone has heard of America’s greatest industrialists, but who was China’s first Captain of Industry?
Zhou Xuexi was the founder of Chee Hsin Cement Company Ltd. After overcoming the Kaiping Mines debacle with Herbert C. Hoover and the Boxer Uprising, he led Chee Hsin to unprecedented success. Under his stewardship, the cement company monopolized the domestic market without the aid of any foreign capital.
An impromptu visit to my aunt’s home in Beijing starts this bilingual book, a commemoration to China’s first cement company and its founder, Zhou Xuexi.
The translations are from three different books (one in Chinese and two in English) that consist of scholarly studies and narratives written by direct descendants of Zhou. The author infuses the book with personal observations about her family’s history, using the grand old siheyuan homes of Beijing as a backdrop. More than seventy images (many heretofore unpublished) illustrate the impact that the cement company has made on daily life in China.
Zhou was my great granduncle. This book is the first in my genealogy series.