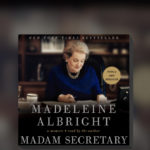 This memoir was published in 2013, written by the first female Secretary of State Madeleine Albright (1997-2001), under Bill Clinton (1993-2001). A informative and engaging book but the rating on Amazon is very low.

We’re all Taking Sides during this election year.  Not sure I’d finish her book: the audio book is 28 hours long. (I like her diction – the audiobook is narrated by herself – which is always a plus for me.) My reason to read is due to her background that she was born in Prague in 1937, shortly before the WW II.

Now as I’m reading more, I became engaged and, will record some her anecdotes …

She opened her book with,

I didn’t want it to end.
Hoping to freeze time, I thought back to the phone ringing one December morning and the words, “I want you to be my Secretary of State,” and to the swearing-in …

At her father’s funeral, she saw the shape of a piano filled with philodendrons, so asked her mother, who sent it.
Mother: “Your father’s most favorite student, Condoleezza Rice.”
Rice was music major but after taking one of her father’s course on international relations, she changed her major and did her PhD dissertation with him.
Years later, when Albright was Michael Dukakis’ foreign policy divisor, she called Rice for a job offer.
Rice: “Madeleine, I don’t know how to tell you this, but I’m a Republican.”
“Condi, how could that be? We had the same father.” 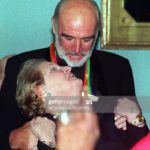 10.31, Sir Sean Connery (1930-2020) who was knighted in 2000, died in Bahamas at the age of 90. I was just reading past it (p349) that she attended the Kennedy Center Honors in 1999 when Connery was one of the five honorees. This photo was taken, it became the news the following day: the new Bond girl.  There was more. A few days later she went to Mid-East and the foreign minister met her in the airport, and said, “Make way for the Bond girl.” ha ha ha… It’s good to know that Arabs have humor too – just kidding.