The covid-19 pandemic is still spreading, I thought about Michael Lewis’ 2016 book, The Undoing Project, where he included the Asian disease problem: say, there is an unusual disease outbreak from Asia, and 600 Americans are expected to die from it. To prepare for the disease, two methods are being considered.

Overwhelming participants of this study chose A. 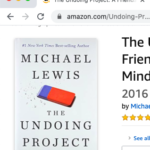 When I looked the Undoing Project  recently on Amazon, unfortunately, the Look inside ⇓ feature isn’t available, so I ended up listened to the entire book. Aside from it was an enjoyment, I’m surprised to find that, although it was mere a few years from my reading of it, (could not have been more than four years) that I’ve more take aways from it this time (or the same take aways but I couldn’t remember.)

The Undoing Project is about two Israeli psychologists Amos Tversky (1937-96), a cognitive and mathematical psychologist, and Daniel Kahneman (1934-), a psychologist and economist who had worked closely for fourteen years, from 1969 to 1983 on cognitive biases that becomes the foundation for behavioral economics, and their breakup in the end.
Their collaboration had shown, we’re NOT as rational as we think we’re. Our judgements, including the medical doctors’ are often erred.
Lewis talked about how he came to write this book. After his Moneyball was published in 2003, Richard Thaler (1945-) and Cass R. Sunstein (1954-), pointed out that Lewis had missed the point, from the perspective of behavioral economics. At that time Lewis had not heard of the Israeli pair. (For a period of time, Tversky’s son took Lewis’ class at Berkeley. And Lewis lives next door to Kahneman.)
The first half or third of the book, is an ode to Israel.
Economic is dry subject but not for Lewis whose story telling and writing are just wonderful.
Tversky was hired by Stanford in a heartbeat in 1978, setting a record for the school, because every other institutions in the US wanted him when he was on the market. Kahneman, however, had to make a do in Canada for eight years. Toward the end of their relationship, one was pretty meant to the other, like, ‘considering Harvard? That’s the school I diced.’ Tversky was getting lion share of the limelight for their work was the problem. The breakup, as Tversky’s wife said, was worse than a divorce. People are not so complicated, relationships between people are complicated, Tversky admitted.
Shortly before Tversky’s death Kahneman joined Princeton in 1993 and went on to win 2002 Nobel Memorial Prize in Economic Sciences; Thaler won the same in 2017.

More on the covid-19