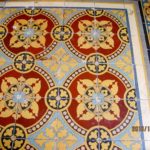 According to Shanghai Municipal Gov’s plaque on Feb 15, 1994,  this is “the St. Petersburg Russo-Asiatic Bank. Designed by German architects Becker & Baedecker. Built in 1901-1905. Brick-and-concrete composite structure. It is the earliest building equipped with tile facing, lifts and sanitary facilities in Shanghai. Typical classical style.” ·

The building now is China Foreign Exchange Trade System CFETS · 中国外汇交易中心, which was formed on April 18, 1994.

Busch Berlin tile was made by ??

According to wiki, the Russo-Asiatic Bank 俄亚银行/俄亞銀行 was created in 1910 in St. Petersburg, by merging with Russo-Chinese Bank and Banque du Nord. It played a major role between 1910-7, becoming the largest bank in Russia by 1914 by total assets. It was nationalized in 1917 by Soviet government, and liquidated in 1926.