Spies of Warsaw & World on Fire

Spies of Warsaw  centered on a French spy who worked at French embassy in Warsaw. Whenever he reported that Hitler’s war preparation, his boss would rolled his eyes, as many people did during that time. No one wanted to fight another bloody war, after WW I. But … 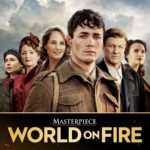 World on Fire followed on multiple ordinary people: the clueless interpreter-turned squad leader, the brave female journalist, gay doctor, anti-Nazi Polish fighter, unwed jazz singer, which is based on the writer’s grandmother. Poland waited for UK and France to save them, but they didn’t come.