The Matriarch: Barbara Bush and the Making of an American Dynasty by Susan Page was published in 2019.  I enjoyed it very much, learnt a lot about the down to earth First Lady Barbara Bush.

The author Page did a tremendous among of research: she was related to Sarah Palin and Nancy Reagan. Page also pointed out the sloppiness of others, that included the plagiarism of the NY Times:

It became an urban myth that her hair termed white about overnight after Robin died, a case study in the way journalists can repeat an error without checking until it becomes widely accepted as fact.

The first time this assertion appeared in print seems to be a Los Angeles Times story story about the new First Lady published on November 20, 1998. “Their daughter Robin died of levies at the age of 4. Barbara, then 30, …” (In fact, Robin was three and Bar was 28.) A New York Times story a few months later, on January 15, 1989, repeated the error that Robin was four and picked ip the sentence about her hair verbatim, albeit without credit …

All photos in this post are from the book. George carried this photo of her to win the war over Hitler and his Nazis … 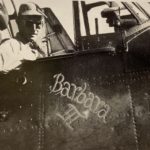 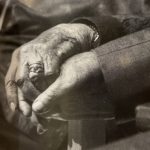 George and Barbara had a happy marriage, the longest of all the 46 presidents – 73 years – they got married in 1945, in Rye, during his leave from his deployment as a Naval officer in World War II. 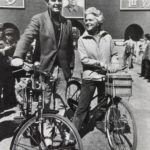 One of George Bush’s many accomplishments and positions, was the chief of the US Liaison Office, not ambassador to China in 1973. He was the second chief, sent by President Ford. Beijing at that time, was still being called Peking. This photo of them, taken in front of TianAnMen, with Chairman Mao beaming down, is widely circulated online.

Bar was invited, as the second choice to give a commencement speech  at Wellesley in 1990. (She opened her speech by mentioning that “More than ten years ago, when I was invited here to talk about our experience about People’s Republic of China …”) Leading up to 1990’s event, there was a small uproar because some graduates felt they were taught to be independant and Mrs. Bush was anything but …

“If she hadn’t been married to this guy who happened to be president we never would have heard of her.”

Ouch … kids … please revisit your view after a few decades out there on your own. I don’t blame the students because we were all young once. The hard earn experience will contour us. 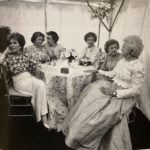 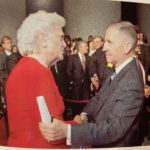 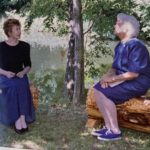