When We Go To War 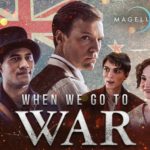 Wiki: “this is a 2015 television drama mini-series from New Zealand. The series uses fictional characters to depict the impact of the First World War on New Zealanders at home as well as in the New Zealand Expeditionary Force during the Gallipoli Campaign and in Egypt.”

ANZAC day (⇒Australian and New Zealand Army Corps) is Australia and New Zealand’s major day of remembrance, of the failed Gallipoli Campaign. Winston Churchill was blamed … but he came back strong during the WW II, became one of the most popular leaders in the world.

The title of each episode (six in total) is named after one character’s letter, which is pretty neat. The series touched on New Zealand War (1845-72, Māori) and the treatment of Germans who lived in NZ during the WW I, gays and premarital pregnancy.

Over all, it’s a good series.