Beancurd, or tofu (doufu 豆腐) is a familiar food nowadays in homes and restaurants the world over. It comes from the coagulation of soy milk. The soy milk, soy sauce, bean curd, stinky tofu (臭豆腐) and soy oil, just to name a few, are staple in China for millenniums. During the food shortage period in the 1960 and 70s, soybeans, fried and roasted in soy sauce were prized.

In the old times, 豆 was written as 菽, which pronounces shu in mandarin and suk in Cantonese. Soybean might have been from the southern pronunciation, since Guangzhou (Canton) was the port for trading for centuries.

The earliest mention of beancurd was perhaps by Dominican missionary to China, Domingo Fernández Navarrete (1698-1786) who went to China. In 1665 he wrote about teu fu in his journal.1

Bowen was an employee of the East India Company who also served four years as prisoner in China. After releasing, he used his knowledge of how Chinese grew the beans while in captive, and enlist the help from James Flint.

Bowen immigrated to Georgia in 1764 and purchased an estate in Savanna where he began to cultivate soybeans, “Luo Taw”, Chinese vetch. He produced soy sauce and soy vermicelli noodles from it. Further, he “conjectured that soybean sprouts had antiscorbutic properties of value to the Royal Navy.” This finding or claim, had won him the gold medal from Royal Society of Arts in 1766. He passed away in 1777 in London. 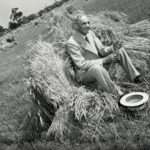 A few sources had credited Benjamin Franklin as the first man who introduced soybean to North America. He did but five years behind Bowen and Flint. Franklin had consulted Flint after reading the Chinese made cheese out of beans,

“so excited my curiosity that I caused enquiry to be made of Mr. Flint, who lived for many years there [in China], in what manner the cheese was made.”

“Dear Sir, 1st Process. The method the Chinese convert Callivances into Towfu. They first steep the Grain in warm water ten or twelve Hours to soften a little, that it may grind easily. It is a stone Mill with a hole in the top to receive a small Grain of warm water which passes between the two Stones the time of grinding to carry off the flower [flour? slurry?] from between & keeps draining into a Tub which has a Sieve or cloth at the top to stop the gross parts from mixing with the flower.3
…

Henry Ford had tried to utilize soy fibre, mixing it with 3/4 of wool to produce suit. There were many others who had ideas for soybeans other than consuming it. Unfortunately, none of them had materialized.4

Today, soybean is one of the major items on President Trump’s trade war with China. In 2018, U.S. was the top producer in the world with 120 million metric tons output and China, the 4th with 14 mm tons but was the top consumer, taking in 74 mm tons while the second, which was the U.S., consumed only 31 mm tons.5 It was 89 mm tons surplus vs 60 mm ton shortage. How will the trade war smooth that out, remains to be seen. It sure sucks. 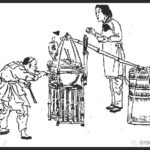 1, 3 History of Tofu and Tofu Products (965 CE to 2013) by William Shurtleff, Akiko Aoyagi. Retrieved 2020.7.19
2 An Anxious Pursuit: Agricultural Innovation and Modernity in the Lower South.
4 SCMP: How United States became world’s top soybean producer, what it does with them, and why US-China trade war makes crop’s future uncertain, 2019.12.18
5 Retrieved on 2020.7.19:  World soybean production