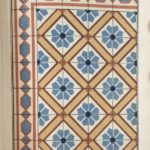 This image is from Chee Hsin Pottery’s Sample Book  ⇒

The two photos ⇓ are taken by Hu Ping and Feng Guoyin. 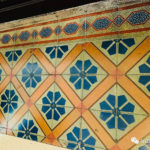 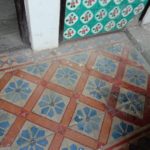 The above photos (L to R): the first photo by Hu was at the B&B‘s edge of the four steps leading into the front porch. It’s interesting to note that this portion retained the old border while the tiles in the foyer did not. The second photo by Feng looks like to be an alley/common path. The feel of the home is average but again, the trim/border tiles were used.

A B&B at No. 60, Lane 532 Yuyuan Road in Jing’an District in Shanghai proves to be a popular location for tv series. First, was the series I’ll Find You a Better Home  《安家》and then came Nothing But Thirty  《三十而已》. Both series premiered in the first half of 2020.