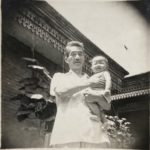 from the concubine, my mother devised the scheme: Popo was Popo. Gonggong and his concubine were Yeye and Nainai.

With Yeye in the courtyard of our siheyuan in Beijing

Chenghu 称呼 title/appellation, has always been important in China, which is strictly followed. During my visit to Beijing in 2003, I was having an animated conversation with a granduncle who was a few years younger than my father, due to the fact that he was the son of the youngest concubine. As the dishes were piling up on our dinner table and our talk rose to a crescendo, I slipped and called him uncle. His warm demeanor instantly vanished, and he admonished me without mercy. “Xiaoning, I am your granduncle.”

Being Chinese can be tough because older generations guard their filial appellations zealously — in the not too distant past, seniority was greatly respected. After you sort out which generation s/he is, the title is the next hurdle. Lineage relationship is important, hence each of them having a specific title. We even have different title for brothers’ wives, and different regions might have slight variations.
The western method of referring to your aunts and uncles works well, but in a different way. Picture three cousins talking about their uncle Joe. Joe is Jiujiu to me, but Shushu 叔叔 to cousin Wen, and Bobo 伯伯 to cousin Wei. So, I have to be careful when referring to Uncle Joe with different cousins. In this situation, I think the western way of simply calling him Uncle Joe may just work better. 各有千秋.

Here are more kinship titles or filial terms from China.