Siheyuans (quadrangles or courtyard dwelling) is an architectural style that could be found throughout China. They’re particularly prominent in Beijing. With the Forbidden City being the largest siheyuan in the country, it sits at the center of the city. My childhood home, which is mere one mile west of the Forbidden City, is one of the siheyuans that made up the old town. Our modest homes are surrounded hutongs, the sprawling and vernacular narrow lanes that lattice the heart of the capital. Siheyuan, is one of the identities that Beijing enjoys. Crumpling and lacking modern amenities, however, China’s run to be the second economy in recent decades has given the dilapidated siheyuan a second life. The astronomical market value for a siheyuan gives it a new name, nicknamed Fortune of Four Walls. (Four rentals in West City District 西城区 in Beijing: the ¥100,000 (about $14,141) a month for the 2,153 sq ft2  siheyuan.) Touring the hutongs is a to-do for tourists and some times, we Beijing natives would enjoy. High end restaurants use name such as Hutong from Hong Kong to New York.

I grew up in one and spent idyllic childhood, if not privileged, there with Yeye and his concubine whom I called Nainai.

The anatomy of a siheyuan.

The house is always on the north-south grid to maximize the sun exposure. The main gate is on the southern side, toward east end. The size/type of a siheyuan is determined by its courtyards. This blueprint is 3-courtyard siheyuan: one large with two small on either end. My home has two which was the standard.

The northern side of the wing is the most desired, was occupied by the head of the family. East and west sides are for their children, and the southern wing, which received very little sunlight, was for serving staff. Any additional courtyard (rear), was used for female family members, grandmother, unmarried sisters and daughters.

Entering the main gate, a screen wall or shadow wall was in place, to preserve privacy. The front courtyard is always narrow. The southern wing could have windows opened on the north side for sunlight but I would think for security reason that it didn’t. 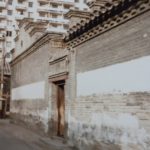 L to R: with Yeye by the western wing; myself in front of northern wing and the new entrance after selling the southern wing in the 1960s. The two color photos were taken in 1984.