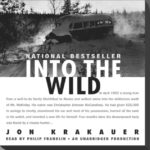 By Jon Krakauer on Chris McCandless (1968-92), an Emory University graduate who ventured into the wild and died in Stampede Trail, Alaska. He wrote for school’s newspaper, could sing and play piano well, loved to read.

My first thought went to his parents. This had to be the toughest thing for them, and his family as well. Some people say he was a hero (disagree), eccentric (agree), arrogant in terms of poorly prepared for his journey into the wild (agree).

Krakauer spent a chapter on himself because he saw himself in Chris. The difference was he made it out alive.

Today this post card on New Yorker caught my eye and after reading a little, did I realize it was his piece. (His web site). Since the publishing of his book Into the Wild in 1996, his articles discussing the death of Chris has been published on New Yorker: