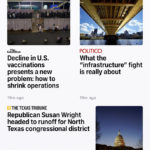 Elon Musk‘s SpaceX capsule returned four astronauts back to earth (after six months up there) last night or early this morning, in a splash-down in the Gulf of Mexico. (WSJ, Reuters.)

India’s COVID-19 daily cases say near record, headlined Reuters.  For the past few days, one photo has been widely discussed: 中国点火 VS印度点火 (Ignition in China VS Ignition in India) by 长安网 ChinaPeace.gov.cn, China’s 中共中央政法委员会  Political and Law Committee of the CPC Central Committee. Many Chinese are enraged over the comparison, and English language media has picked it up. BBC, “… The post on Chinese site Weibo showed an image of a rocket launch in China alongside a photo of the bodies of Covid victims being cremated in India.  …”, and SCMP ‘A chance to make peace’: the Chinese toughing out India’s coronavirus storm.  What are they thinking to post such inflammatory photo??? 印度🇮🇳 顶住 加油 💪

Decline in US Covid vaccinations presents new problem: how to shrink operations, by The Guardian 美国🇺🇸 疫苗打的差不多了 现在政府在头疼怎么关闭这些疫苗接种点.

During Auto Shanghai that was held in April 21-28, a woman became the center of attention who wore a t-shirt that said, breaks don’t work who stood atop of a red Tesla car and screamed. Reportedly, her new car had crashed … Tesla released the data that they were traveling at 118 mp (the max speed in that stretch is 80mp.)  One of the post in Chinese titled, 特斯拉你还是走吧,看完你的《说明》我哭了,我们也无能无力 (Tesla, you should go. I cried after reading your “Explanation”, and we are powerless).

Insider wrote on April 30, that Beijing’s campaign to rein in Tesla has begun, now experts say it has a limited time to sell cars before it gets canceled:

Lastly, Insider reported that Tesla gigafactor is going up near Berlin. Market vs political stability.