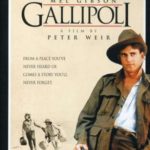 One of Mel Gibson‘s early movies. It was about a few Aussie young men bored at home, longing for some action, any action, which meant joined the army during the WW I. They were sent to the peninsular of Gallipoli in Turkey (then the Ottoman Empire). Battle of the Nek in 1915 was the grand finale … The movie did really well, in term of box office.

Australia had gainer her independence from the UK in 1901 and was eager to try their presence and voice ini the world stage. But Battle of the Nek, which was led by the British wasn’t well planned  and executed …