I watched this 2020 movie on Amazon: pretty good.

The music sounded very Hollywood. Cinematography is very good. The story is simply: to win.

I’ve been following Chinese women’s volleyball sporadically, so I enjoyed it as a somewhat ‘insider’. Not sure it would mean same for people who don’t know the background.  I’ve read some reportage of Lang Ping 郎平, the legendary player-turned coach who led team of China and team of USA. The movie opened with her team USA defeated her former team China in Beijing Olympics in 2008. A little footnotes: she was the MVP of women volleyball in 1984 Olympics in LA, beating the home team to win the Gold, and won the gold medal with team China in 2016 Rio Olympics.

There are some cute stories: getting their hair permed before going overseas, and first taste of coffee: bitter, like Chinese medicine -:). 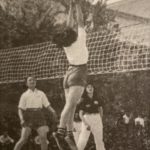 The former soccer coach for team China, Marcello Lippi who resigned in 2019 after losing to Syria – YES lost to Syria!!! He said, My pay is very high, and I take all the blame. His pay in 2018 was $28 million, only second to Manchester United’s Jose Mourinho’s $31 million. But  Manchester United ranks high on Fifa while China is 73rd. Now I’m wondering how much Lang Ping is paid for her skipper-ship.