This tv series is about King Henry VIII who had six wives, sixteenth century England. The four seasons series was first aired in 2007.  The House of Tudor (1485-1603) was founded by his father Henry VII. The House survived 118 years. After his passed away, three children from three different wives ruled till, with Elizabeth I ended it in 1603. James VI of Scotland succeeded Elizabeth I in 1603 when Scotland and England merged, becoming James I, till 1625, who was from the House of Stuart.

The costumes are beautiful. Some, seems, to  have Chinese flavors. The red hat (Henry VIII’s son who died young) is so similar with one of my aunt’s, and buttons on his jacket (?) look like Chinese 盘扣  or 旗袍扣; and these tiles. 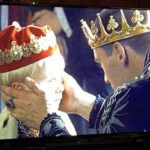 The two-season tv series The Spanish Princess is about journey of Catherine (1485-1536) of Aragon, the daughter of Isabella I of Castile, from Spain, to be the queen of England.