The first day of the last month, a news caught my eyes: diversify or delist. LGBT has been around for a while but what is the Q stands for? It seems the acronym is sure growing, pretty fast.

Isn’t sexual tendency or orientation a private matter? If that’s true, how a company to know who is LGBTQ? And what do they have to do with minorities?

What is happening to meritocracy?

Just this past Sunday, Fareed Zakaria said in his GPS, that he always leaves out the box on applications or forms, where it asks for his ethnicity, unless the law requires it (i.e. census at 6:20 mark) because he just doesn’t feel right to piggy bag on the tragedy that affect blacks and native Americans and others who have truly faced discrimination.

“I wanted to be judged by the content of my character not color of my skin.”

On the other hand, this requirement wants to force the corp world to change. But does nasdaq have the right to force a company to delist? Will the stock holders allow it to do so?

Exclusive from the New York Times: 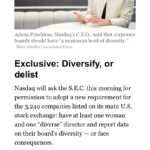 Nasdaq will ask the S.E.C. this morning for permission to adopt a new requirement for the 3,249 companies listed on its main U.S. stock exchange: have at least one woman and one “diverse” director and report data on their board’s diversity — or face consequences.

Nasdaq will require boards to have at least one woman and one director who self-identifies as an underrepresented minority or L.G.B.T.Q. (Those categories are not, of course, mutually exclusive.) To give companies time to comply, they will need to publicly disclose their board diversity data within a year of S.E.C. approval, and have at least one woman or diverse director within two years. Bigger companies will be expected to have one of each type of director within four years.

Companies that don’t disclose diversity information face potential delisting, while those that report their data but don’t meet the standards will have to publicly explain why. Over the past six months, Nasdaq found that more than 75 percent of its listed companies did not meet its proposed diversity requirements.

Nasdaq lobbied the S.E.C. to make diversity disclosure a rule for all companies. “The ideal outcome would be for the S.E.C. to take a role here,” Adena Friedman, Nasdaq’s C.E.O., told DealBook. “They could actually apply it to public and private companies because they oversee the private equity industry as well.”

It would be the first time a major stock exchange demanded more disclosure than the law requires, which Ms. Friedman described as “an unusual step.” It raises questions about whether exchanges could use their listing rules to force action on other hot-button issues, like climate change.

The move isn’t taking place in a vacuum. Goldman Sachs announced that it would require companies it helps take public to have at least one diverse board member. A new California law imposes a minimum number of minority directors on companies headquartered in the state. And institutional investors are pushing for more diversity under the E.S.G. banner.

Nasdaq cites research showing the benefits of board diversity, from higher-quality financial disclosures to the lower likelihood of audit problems. “Diversity of the board is an important element of giving investors confidence in the future sustainability of the company,” Ms. Friedman said. “It’s not like we’re saying this is an optimal composition of a board, but it’s a minimum level of diversity that we think every board should have.”

What happens next: After Nasdaq files its request, the S.E.C. will solicit public comments. That typically lasts several weeks, and then the commission will decide how to proceed.

A November to remember for stocks. The S&P 500 gained nearly 11 percent in November, its fourth-best month in 30 years, amid progress on coronavirus vaccines and clarity on the U.S. presidential election. (U.S. stock futures are also up today.) Speaking of gains, shares in Moderna more than doubled yesterday after the company sought emergency F.D.A. authorization for its Covid-19 vaccine.