The Chinese by Harper 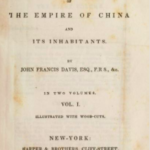 The Chinese: A General Description of the Empire of China and its Inhabitants, by Sir John Francis Davis, esq. F.R.S. etc., had two volumes published in New York by Harper & Brothers on Cliff Street, in 1836.

The book: is compiled from his notes while living in China: “le désir de tout connaître, en étant obligé de le décrire” which translates to “the desire to know everything, while being obliged to describe it.”

The publisher: Harper & Brothers at that time, was located on the Cliff Street. It was founded by James and John Harper in 1817 in New York, as J & J Harper. By 1920s, Fletcher and Joe also joined in mid of 1920s, therefore, the name changed to Harper & Brothers. From 1962-1990, it merged with Row, becoming Harper & Row and from 1990 to present, it’s known as HarperCollins, owned by News Corp.