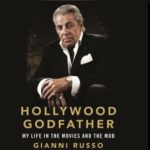 He’s a mobster and actor in The Godfather (1972), playing Rizzi, the son in law who betrayed the family and killed by Al Pacino – Sunny.

One of today’s news, A New Jersey Catholic diocese agrees to pay $87.5M to settle sex abuse lawsuits by NPR. My first question is, where did they get that type of money? Business insurance? Then, I laughed at myself softly, Russo wrote about laundering money in details in the book.

he and an associate (Nick) made trips to Roma couple of times a month,  carrying uncirculated, crispy $100 bills, stuffed into 24′ wide engineering bag that could contain unto $2m each, depositing into the Vatican Bank. The archbishop Paul Marcinkus (1922-2006), an American, would help them to invest the money, paying them 5%; keeping 15% for the church (the norm was 6%). At the time – 1978, the Swiss banks were the first choose in the world of money laundering/transfers, and commending 1% fee from the depositors.

Russo asked, “If we were gagsters, what was the church?”