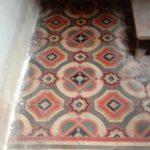 According to wiki, Gaoqiao (High Bridge) is a town in Pudong new area. The old part of the town dating back to Southern Song Dynasty (1127-1279) and the newer part, since 2001, is known as Holland Village due to the Dutch influenced architecture. There are other western themes, such as Italian, Spanish, Canadian, English, Scandinavian and German. Quite a miniature united nations.